The main tool in my setup is my Mac. I currently have a MacBook Pro 13-inch, 2018, Four Thunderbolt 3 Ports, 2.7 GHz Quad-Core Intel Core i7, 16 GB of RAM and 1TB of storage. From time to time I (seldom) like to play some games on Steam on a Windows machine, like The Ruiner or This war of mine.

The Win machine is a monster that I upgrade sometimes when I find some interesting piece of hardware on sale when browsing on Amazon, so I’m not going to list its components. Let’s say that it’s good enough to play the latest games 😁.

The problem of having a dual system on the same desk.

This seems trivial at first, but when you find your favorite mouse and you don’t want to manually switch it every time you jump from Win to Mac or vice versa you start to go down the rabbit hole. What about the keyboard instead? And the monitor? What about your favorite speaker? And the headphones?

This is a work in progress and it constantly evolves but today I’m going to share the solution I’ve adopted.

After some digging I went for an LG 32UK550 32” 4K. Initially I’ve used an HDMI Switcher but later on I’ve abandoned this configuration in favor of the monitor ports directly and two good cables. The LG can handles perfectly two inputs and changing from one machine to another takes just two seconds. Moreover, using the display port seems even better than HDMI as switching is faster. The cable between the Mac and the LG is a Moshi 99 mo084102. It’s expensive but using cheap cables gave me some many problems in the past so my suggestion is to buy good quality cables.

I’m a huge fan or wired devices, but for who prefers BT devices: switching them on request may be trickier, you’ve be warned 😁.
Thus, because all my devices are wired the purchase of a UGREEN USB 3.0 switcher fixed all my problems. I’ve connected to it my mouse (a Logitech G502) and my two keyboards (yes, I’m a developer and I use two keyboards at the same time 😜). Whenever I need to switch from a system to another I just push a button, the switch is immediate.
For the record the two (great) keyboards are a Logitech G910 Orion Spectrum, and a mechanical Vortex Race 3 with Cherry MX Clear, both rigorously with international layout. The former is usually better for gaming, photo and video editing, setting complex shortcuts; the latter is simply the best for programming and long writing days.

Switching audio peripherals is something I’ve discovered later on, as after many attempts I was at the point to give up. I simply had too many requirements: I have an old set of Harman/Kardon speakers that I use all the time, but when my house gets noisy or I need to use the noise cancelling, I rely on my Bose QuietComfort 25; on top of this I would have loved to use a physical gear to adjust the volume and maybe a quick button to set everything on mute. And of course both peripherals (headphone and speakers) should offer some kind of way to switch from Mac to PC.

One day, totally by chance, I found this small mighty mixer on Aliexpress 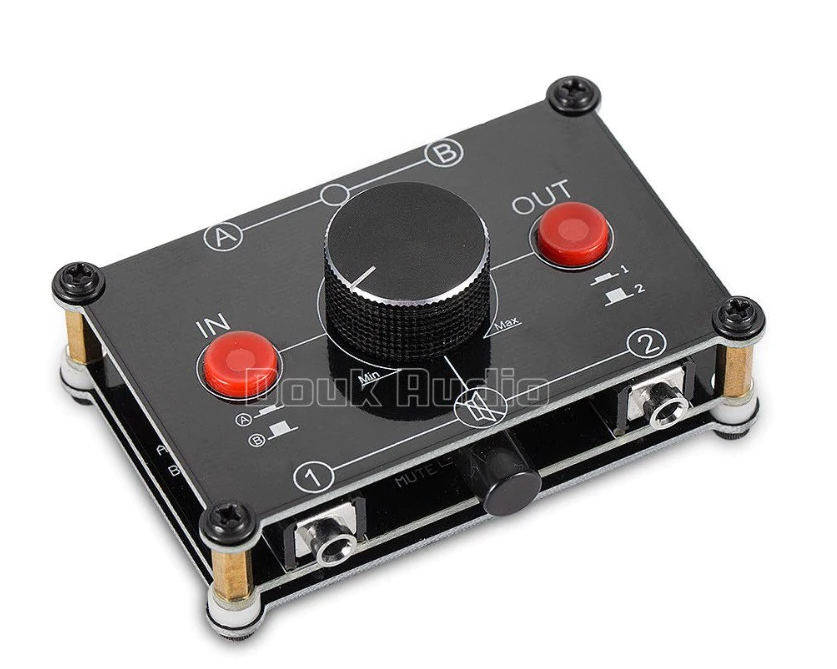 It’s called Little Bear Mini and it costs around 20$. I cannot stress enough how great this little thing is! It has all the requirements I was looking for, the gear works great, if something may break in the future, it’s super easy to disassemble and the components can be easily replaced. Now I can switch the source (Mac/PC) with a button, with the other button I can jump from speakers to headphone, and when required the black button mutes everything.

Let’s do the extra mile

This quick review of my setup is almost over, last but not least I’ve bought a D-Link DGS-105 Switch 5 Ports, so both computers are in a sub net. I’ll not go into further details here but the possibilities are infinite: shared hard drives, wake on lan, arduino, raspberry pie, etc..

Other minors things that improved my daily work are:

And that’s all! As I said previously, this setup constantly evolves and there are good chances that after some time this system will become outdated.
However, I like the idea of having the same set of devices shared between a Mac and a PC. I’m sure that even in a couple of years I’ll have different computers but the setup to share devices will most likely be the same.

What do you think of my setup?
Do you have questions?
Ping me on Twitter @simonarpe and let me know 😎.